The new Public Contracts Regulations 2015 (SI 2015/102) ("the Regulations”) were published and laid before Parliament on 5 February 2015. To download the Regulations from the Government's Legislation website please click here.

Electronic communications and submission of tenders

Procurement of health services for the purposes of the NHS within the meaning and scope of the NHS (Procurement, Patient Choice and Competition) (No.2) Regulations

The  “national” provisions in Part 4 of the Regulations do not apply to a contracting authority in Northern Ireland and Wales whose functions are wholly or mainly devolved functions. The “national” provisions primarily concern qualitative selection, abolition of PQQs and advertising requirements for low value contracts, and payment of invoices (Reg 1(8)).

The Regulations do not apply in Scotland, except in relation to provisions concerning the amendment of the Defence and Security Public Contracts Regulations 2011 (Reg 1(7)).

The Regulations are divided into five parts.

Part 1, Regulations 1 and 2, set out information on commencement and application, as well as the definitions

Part 2, Regulations 3 to 84, implement Directive 2014/24/EU. The drafters have used a “copy out” approach which means that the content has been copied from the Directive with minimal changes. 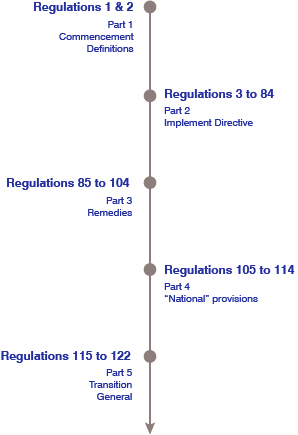 Part 4, Regulations 105 to 114, set out “national” provisions which are driven primarily by the recommendations of Lord Young concerning low value procurements, the pre-qualification process, payment of invoices and validity of contracts.

Part 5, Regulations 115 to 122, deal with transitional arrangements, temporary exemptions and other general issues.

Regulations applying to Utilities are expected later in the year and we expect that the new Regulations on Concessions will be implemented by April 2016.

5 years post Grenfell – what have we learnt and are high-rise...

The key things that have been learnt since the fire, and considerations about whether enough has been done to put right the failings and ensure the safety of people in high-rise residential buildings in the future.