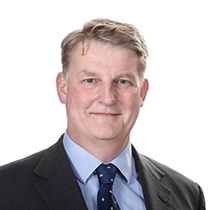 He is commercial and positive, with a can-do approach.