It is over a year since the de-regulatory measures in the Housing and Planning Act 2016 took effect. Our briefing 'De-regulation: one year on' considered the changes that have occurred in the sector since then but one thing is certain: there has been a rapid increase in the number of housing associations converting from registered charities to become charitable community benefit societies (CBSs).

The main driver behind the increase in conversions is the removal of the Regulator of Social Housing's (the Regulator) disposals consents regime, which has resulted in registered charity housing associations being required to comply with disposal and execution requirements of the Charites Act 2011. By contrast, charitable CBSs do not need to comply with these requirements.

This has led to increased asset management costs, not just because of the need to satisfy the valuation requirements in that Act, but also to ensure that the correct delegations are in place to make the appropriate certificates required, fixing such delegations where these are incorrect and also through making applications to the Charity Commission where consent is required.

It is clear that this regime is not geared up to deal with large stock-holding businesses where intra-group transfers are common, and even clearer that the Commission does not have the resources to deal with consent applications when they arise. For housing associations who are trying to deliver value for money and compete in a sector that is becoming more commercial and fast-paced, it has stacked up from an efficiency perspective to convert.

There has also been another key motivation to convert: groups are consolidating their structures and true 'legal' mergers (i.e. where the assets and liabilities are brought together into one entity) are increasing. The legislation which governs community benefit societies contains statutory provisions that are widely recognised as best practice to achieve such mergers. This does not just relate to mergers between housing associations; we have converted commercial and charitable subsidiaries and other bodies in preparation to consolidate / merge, because these statutory processes operate to transfer all assets and liabilities by virtue of a shareholders' resolution. This plays an important role in reassuring board members around residual liabilities.

What is the process?

The process to convert has become more streamlined over the last 18 months. Funders are more familiar with the process and any barriers relating to local authorities holding a 'golden share' and therefore blocking the required shareholders' special resolution to convert have been removed with the implementation of the Regulation of Social Housing (Influence of Local Authorities) (England) Regulations 2017 (although if an association has open shareholding some thought will need to be given to engagement here).

However, one area that continues to cause significant delay and which should therefore be addressed at an early stage is where engagement is required with pension schemes. This is because funders' advisers are of the view that the conversion process (as set out in legislation) has the effect of altering priority rankings of debt. Letters are therefore required from large unsecured creditors (such as pension schemes and Homes England) confirming that the position pre-conversion will be preserved post-conversion. We have significant experience of liaising with pension schemes in relation to this.

Many other implications are administrative; the process of updating registered titles with the Land Registry can take some time and therefore needs to be co-ordinated with any significant securitisation or stock rationalisation exercises being undertaken. We have taken the approach of 'prioritising' specific titles to ensure these are dealt with quickly. Stakeholders and key contractors must also be notified, and internal teams need to familiarise themselves with the new registrar (the Financial Conduct Authority rather than Companies House), corporate status and registration number.

If you are considering converting, whether as a standalone project or part of a wider consolidation, please contact Sarah Greenhalgh. 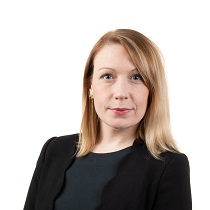