The Procurement Bill was introduced on 11 May 2022 and is currently going through the parliamentary process. In this series of Procurement Bill Bytes we take a detailed look at some of the issues and draw out some of the key changes that contracting authorities and suppliers need to get to grips with.

It should be noted that any of the provisions of the Procurement Bill might change as a result of the process of parliamentary approval. If changes occur to the provisions described in this article, we will update it on our website at the appropriate time.

We are really interested in your thoughts on how these reforms will affect you and are particularly keen to hear any questions you may have on the topics covered in our Procurement Bill Bytes. Please send any questions to jessica.boardman@bevanbrittan.com and our procurement team will endeavour to answer as many as we can in our Procurement Bill Bytes Q&A Webinar to be published next month.

In this article we explore the Direct Award provisions in the Bill.

WHERE ARE THESE PROVISIONS FOUND IN THE BILL?

The Direct Award provisions are set out in Chapter 3 and Schedule 5, and include:

WHEN CAN A DIRECT AWARD BE MADE?

A direct award can be made either pursuant to Section 40 if a justification for the direct award as set out in Schedule 5 exists, or where a Minister has made regulations to protect life, health, public order or safety under Section 41, or where the authority meets the conditions in Section 42 for switching to direct award.

Direct awards can be made pursuant to Section 40 where a justification for the direct award exists in Schedule 5:

This justification relates to research and development contracts, where the production or supply concerns a specific prototype, or “novel” goods and services which the contracting authority has commissioned for development. The goods or services concerned must have been produced for one or more of three specified purposes; namely, testing their suitability, researching whether their production at scale would be viable, and any other research, experiment, study, or development.

This justification can be used where there is only one supplier capable of delivering a requirement. It can be used where the requirement is the creation or acquisition of a unique work of art or performance, where there are distinct intellectual property or exclusive rights to production, or merely where there is a complete absence of competition. Note that the exceptions in relation to IP rights and absence of competition both require that there must be no reasonable alternative to those goods, services, or works that might enable competition.

Additional or repeat goods, services or works by existing suppliers

There are two separate elements under this justification.

The second element relates to the supply of similar goods, services, or works by an existing supplier awarded a contract following a competitive tendering process. This justification can only be used if: (a) the original contract was awarded within the period of five years ending with the day of publication of the transparency notice (see our first article on Notices); and (b) the intention to rely on this direct award justification to procure those similar goods, services or works was made clear in the authority’s tender notice or tender documents for the original contract.

Contracting authorities therefore need to consider at the point of planning a competitive tendering procedure and preparing the tender notice whether they are likely to want to procure similar goods, services or works from the successful supplier in the next 5 years and to flag that possibility in the tender notice.

This justification simply applies to any contract concerning the purchase of goods on a commodity market.

Under this justification, the contract may be awarded to a supplier where the contracting authority will obtain advantageous terms due to a supplier undergoing insolvency proceedings. This most obviously refers to obtaining discounted materials in a ‘closing down sale’, but advantageous terms do not need to be limited to price. Note that the supplier to whom the contract is awarded need not be the entity undergoing insolvency proceedings. The justification provides clarification on what constitutes an “insolvency proceeding”; namely, bankruptcy or sequestration, insolvency or winding up, administration, receivership, liquidation, undergoing a creditor arrangement, being subject to a mere petition for such arrangements, and undergoing any equivalent of the above in a jurisdiction outside England and Wales.

This applies where a situation of “extreme and unavoidable urgency” exists, such that there is no time to run a competitive tender. However, this justification does not apply where the urgency stems from any act or omission of the authority, or arises from a situation that should have been foreseen by that authority. In some cases, the Section 41 provision (see above) may still enable direct awards to deal with urgent situations that were foreseeable.

This justification reflects the Section 41 direct award provision (covered above), whereby a Minister can make regulations to permit direct awards where they are “necessary” to protect human, animal, or plant life or health, or to maintain public order or public safety.

User choice contracts are those pursuant to which services are supplied directly to a particular individual under the Section 8 light touch regime; usually in the context of delivering bespoke care. To be applied, either the individual to be cared for must express a preference for who should supply the services, or there must be only one supplier capable of supplying them. Furthermore, the authority must also believe that a contract award via competitive procedure is not in the best interests of the individual.

There are three scenarios in which this justification for a direct award may be used.

First, where the contract is a defence and security contract for the supply of air or maritime transport services to the military or security services; either where they are currently stationed outside the UK or in supplying the services this would allow them to be deployed there. The requirements of such service provision must also be such that no reasonable supplier could guarantee the terms of the tender remaining in effect for 10 days past the day of submission. This justification would appear to operate so as to enable direct award of contracts in short-term military or defence-related operational situations that are so fluid as to make any guarantee as to their duration or terms difficult to provide.

In this respect, if a Minister considers it necessary to protect human, animal or plant life or health, or to protect public order or safety, the Minister can make regulations to allow the direct award of contracts, essentially creating a new direct award justification.

Provided a supplier is not an excluded supplier, a contracting authority can award it a public contract directly if it has run a competitive tendering process but has received no suitable tenders or requests to participate. Unlike the current provision in Regulation 32(2)(a) of the PCR 2015, Section 42 does not contain an express requirement that the initial conditions of the contract are not substantially altered. This requirement ensured equal treatment by preventing authorities from making changes in a directly awarded contract which, had they been part of the initial award procedure, would have allowed for different tenderers to participate or different tenders to be accepted. It is therefore arguably implied by the overarching duty to treat suppliers equally. There is also no requirement to submit a report to the Cabinet Office or equivalent body in the devolved administrations if they request one.

What is “not suitable”?

Under Section 42(2), a tender or request to participate is not suitable if:

CAN A DIRECT AWARD BE MADE TO ANY SUPPLIER?

There are some limitations around to whom a direct award can be made.  First, before making a direct award, a contracting authority must consider whether a supplier is an “excludable supplier” (Section 40(4)).  (Considering whether a supplier is an “excluded supplier” or an “excludable supplier” involves considering the mandatory and discretionary exclusion grounds (respectively). We will cover this in further detail in a future article.

WHAT ARE THE NOTICE REQUIREMENTS FOR A DIRECT AWARD?

Before making a direct award a transparency notice must set out that the contracting authority intends to award a contract directly and any other information specified in regulations due to be published under Section 86.

The only exemption to having to issue a transparency notice is if the direct award is made on the basis of the justification in Schedule 5 for user choice contracts (paragraph 16).

The requirement for transparency is a significant change from current provisions where a contracting authority making a direct award under Regulation 32 (negotiated procedure without notice) has a choice whether to issue a transparency notice (a VEAT notice) but is not required to. 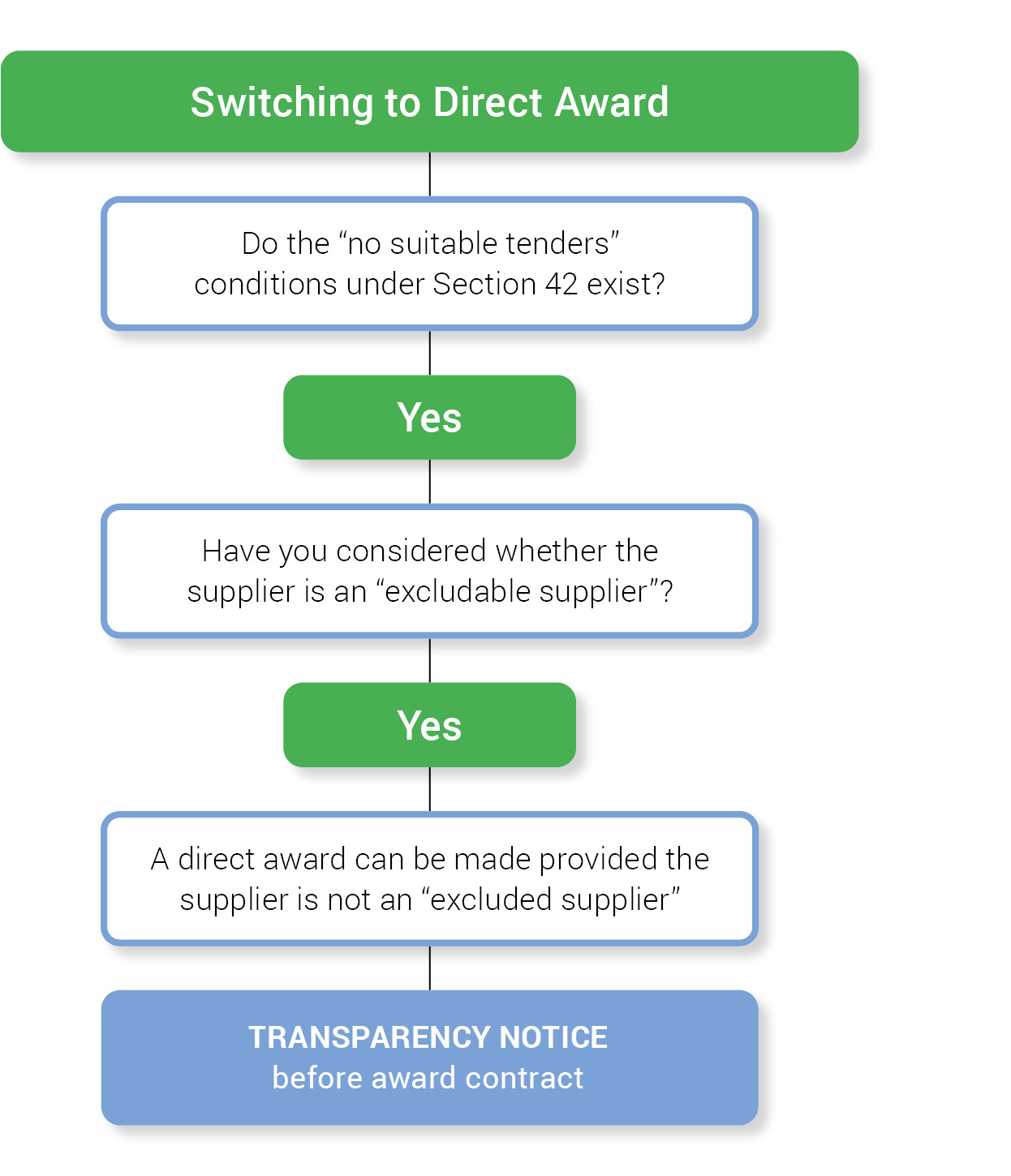 This article was co-written by Rupert Simpson, Trainee Solicitor.

Of Adequacy and Convenience: High Court lifts automatic suspension in...