The respondent companies granted leases for unoccupied commercial properties to special purpose vehicles (SPVs) they had set up. The SPVs had no assets or business. The companies did not intend to collect the rent from the SPVs.

Pursuant to the leases, the SPVs had the legal right to possession of the properties. The companies intended that this would mean the SPVs would be the “owners” of the properties under section 65(1) of the Local Government Finance Act 1988 (1988 Act), which defines “owner” as "person entitled to possession of it". Subject to certain conditions, section 45 of the 1988 Act states that "owners" of unoccupied business properties are required to pay non-domestic (business) rates (rates). Therefore, the companies' intentions were that after they granted the leases, the SPVs would be liable for the rates.

After granting the leases, the companies dissolved or liquidated the SPVs. Liability for the rates accumulated unpaid until the SPV was dissolved, following which the further accruing liability would be incurred by the Crown until the Crown disclaimed the leases and the liability was extinguished, or if liquidated the SPV would be exempt from payment under regulation 4(k) of the Non-Domestic Rating (Unoccupied Property) (England) Regulations 2008 (2008 Regulations)). The liquidation / dissolution process was then artificially prolonged (sometimes by years) to maintain the existence of the SPVs and consequently, the companies avoidance of liability to pay the rates. The schemes have been branded an abuse of process, and in some cases are likely to have involved breaches of director’s duties and the commission of criminal offences by those directors.

In its judgment of 14 May 2021, the Supreme Court unanimously allowed the local authorities’ appeal and set aside the order to strike out the claim on ground 1 – statutory interpretation, but upheld the Court of Appeal’s decision on ground 2 – piercing the corporate veil. Lord Briggs and Lord Leggatt gave a joint judgment, with which Lord Reed, Lord Hodge, and Lord Kitchin agreed with.

The Supreme Court confirmed that the Ramsay approach is to read the statute as a whole in its historical context and interpret the statute to give effect to Parliament’s purpose (so far as is possible).

The Supreme Court held that:

Therefore, the Supreme Court held there was a triable issue whether the companies remained liable for the rates throughout the duration of the leases and the local authorities’ claim should not be struck out.

If your organisation has been affected by any of the above issues and requires support and/or advice, please contact Virginia Cooper. 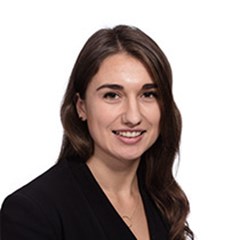 I am a commercial litigation specialist with experience in advising...