Over a number of years the Court of Justice of the European Union (CJEU) has developed two “in-house” or “public-public” exceptions to the EU procurement rules. Where these exceptions apply contracting authorities are able to award contracts direct to other organisations without following an EU procurement process. The two exceptions are often called the “Teckal” and "Hamburg” exceptions, referring to the CJEU cases in which they were first established.

The new Directive codifies the Teckal and Hamburg exceptions. These exceptions are now covered by Article 12/Regulation 12 of the Directive, under the heading “Public contracts between entities within the public sector”.

This covers the situation where a contracting authority sets up a separate legal entity and then awards contracts to that legal entity – referred to as the “controlled body” in this Byte. For the Teckal exception to apply a two part test has to be satisfied, relating to control and activity:

Extensive CJEU case law has developed and refined both parts of the two part Teckal test. In addition there is a requirement that there is no private sector participation in the body which satisfies the two part test 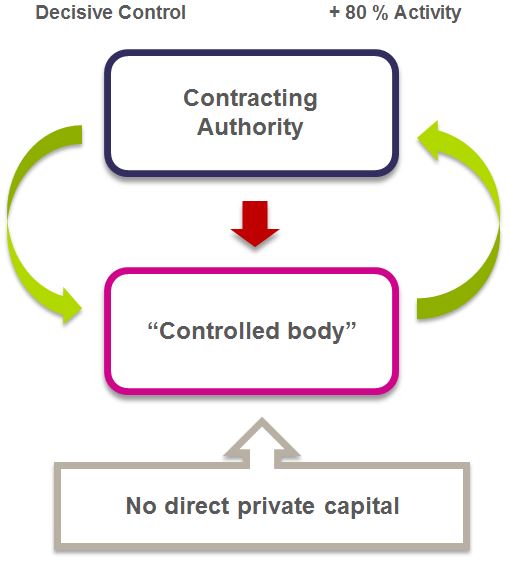 The two part test has been incorporated into the Directive and the Public Contracts Regulations, with some further helpful clarification. The Regulations also include a provision relating to private sector participation.

The “control” part of the test is expressed in a similar way to the current Teckal test developed by case law. The control must be similar to that which the contracting authority exercises over its own departments. Regulation 12 confirms that sufficient control is deemed to exist where the contracting authority exercises “decisive influence over both strategic objectives and significant decisions” of the controlled body.

Regulation 12 also confirms the principle established in case law that there can be more than one contracting authority owner. So joint control is permitted, subject to satisfying specified conditions.

There has been considerable uncertainty around what level of activity is required to satisfy the second part of the Teckal test. This has now been clarified. The concept of “essential activity” is replaced with a requirement that the level of activity carried out by the controlled body for the owner authority is “more than 80%”.

The provisions on joint control mean that where there is more than one contracting authority owner the levels of activity can vary for each for different owners. The requirement for more than 80% activity is satisfied by calculating the activity carried out for all of the owner authorities.

No “direct private capital participation” in the controlled body is allowed. There is an exception to this general rule which permits “non-controlling and non-blocking forms of private capital participation” where (1) it is required by national legislation; and (2) where those participants do not exert a decisive influence on the controlled body. This allows for the possibility of certain forms of government sanctioned private investment, for example.

This provision does not apply to controlled bodies which are jointly controlled by more than one contracting authority.

The “Hamburg” exception developed by the CJEU permits the establishment, in certain circumstances, of cooperation arrangements between contracting authorities without the need to follow EU procurement rules. The arrangements must be genuinely cooperative and non-commercial in nature.

The Directive/Regulations have clarified the circumstances where the exception will apply.  The arrangements must be concluded exclusively between two or more contracting authorities, no private participation is permitted.

Article 12(4)/Regulation 12(7) sets out three conditions which must all be satisfied:

The last condition arguably provides greater flexibility that the current case law on the “Hamburg” exception which appears not to permit commercial market activity.

Article 12/Regulation 12 also contains provisions concerning the calculation of the required +80%/-20% activity levels. The calculations are to be based on average total turnover or “an appropriate alternative activity-based measure” for three years preceding the contract award.

There are also provisions covering the situation where data for the preceding three years is not available or is no longer relevant because the relevant organisation had not been created, was not active or has been reorganised. In these cases “it shall be sufficient to show that the measurement of activity is credible, particularly by means of business projections”. These rather vague provisions leave quite a lot of room for interpretation of precisely what evidence is needed to establish the required levels of activity.

5 years post Grenfell – what have we learnt and are high-rise...

The key things that have been learnt since the fire, and considerations about whether enough has been done to put right the failings and ensure the safety of people in high-rise residential buildings in the future.