On 6 December 2021 the government published its response to the Green Paper on proposed reform to public procurement. A link to the response can be found here.

This is the third in a series of articles which the procurement law team at Bevan Brittan LLP are producing on what the proposed reforms will mean for the public sector and suppliers. Each article will give practical commentary on the different themes within the proposed reforms.

Here is a menu of what we will be covering, with links to each Part which will become live once each Part is published:

In the third of our Road to Reform series of articles covering the Government’s response to consultation on the proposed reforms to the public procurement regime we look at (1) the government’s proposal to create a single uniform set of regulations and the exemptions which will apply (2) how the procurement reforms will interface with health procurement (3) the light touch regime and (4) concessions.

A single, uniform framework (with exemptions)

The Government’s desire to simplify and streamline procurement regulation, arguably in order to give the impression of less regulation overall, has been a key theme of the proposed reforms from the outset. There is of course much to be lauded in simplification, but there is also much in the current regulations that reflects the specific complexities of different sectors that will need to be carried over into the new regime. For example, defence procurement has to be conducted factoring in issues of national security and confidentiality far more often than other sectors, and utilities benefit from a number of exemptions and a specific process to streamline the qualification of bidders.

The Government has confirmed following consultation that some of the specific flexibilities in the UCR and DSPCR should be maintained and therefore that a number of exceptions to the uniform framework and specific features for these sectors will remain, which we set out below. We will therefore have one single regulatory regime, but a number of sector-specific exemptions and particular features that will add to the complexity of the legislation overall.

Under the current regime, concessions contracts benefit from lighter touch regulation. A concession is a contract where some or all of the income comes from third party sources – such as payments by members of the public using a café, sports centre, public toilets or toll bridge – and the provider takes on the risk associated with the operation of the concession.

One of the biggest changes arising out of forthcoming reform to health legislation is that the procurement of healthcare services will be carved out of the new procurement regime. The Government sees the current requirement to advertise all contracts for healthcare services above the Light Regime threshold as adding unnecessary bureaucracy and hindering integration of care services and the development of stable collaborations between local authorities and the NHS (both in terms of joint commissioning and integrated provision across health, public health and social care). Therefore, the procurement of healthcare services (and “other goods and services that are procured with those healthcare services”) are to be carved out of the PCR 2015 and will instead be regulated by the new Provider Selection Regime pursuant to the new Health and Care Act (currently passing through Parliament). The government have not provided a specific date for when the Provider Selection Regime will come into force but it is expected to be after the introduction of the new Health and Care Act (anticipated in July 2022) and before the introduction of the new procurement regime.

More information on the anticipated changes being implemented through the Provider Selection Regime (PSR) can be found in our articles here and here. There is much still to be developed about how the PSR will work, and we will be interested to see whether it achieves the objective of reducing the burden of procurement given the requirements imposed to encourage robust and lawful decision-making and the scrutiny likely to be applied by providers to those decisions.

Despite the fact that healthcare services are being removed from procurement regulation, the Light Touch Regime will remain. Respondents to the consultation commented on the need for special consideration for procurements where there is an element of service user choice (for example under the Care Act 2014) and expressed concerns about the increased administrative burden of bringing a range of existing Light Touch contracts within the fully regulated regime, in particular given the important participation of SMEs and VCSEs in these contracts. These comments appear to have been taken on board with the Government confirming that certain services will be permitted to be treated differently, in a manner similar to the former Light Touch Regime. The scope of the changes remains to be seen, but a summary of the current position is set out below. 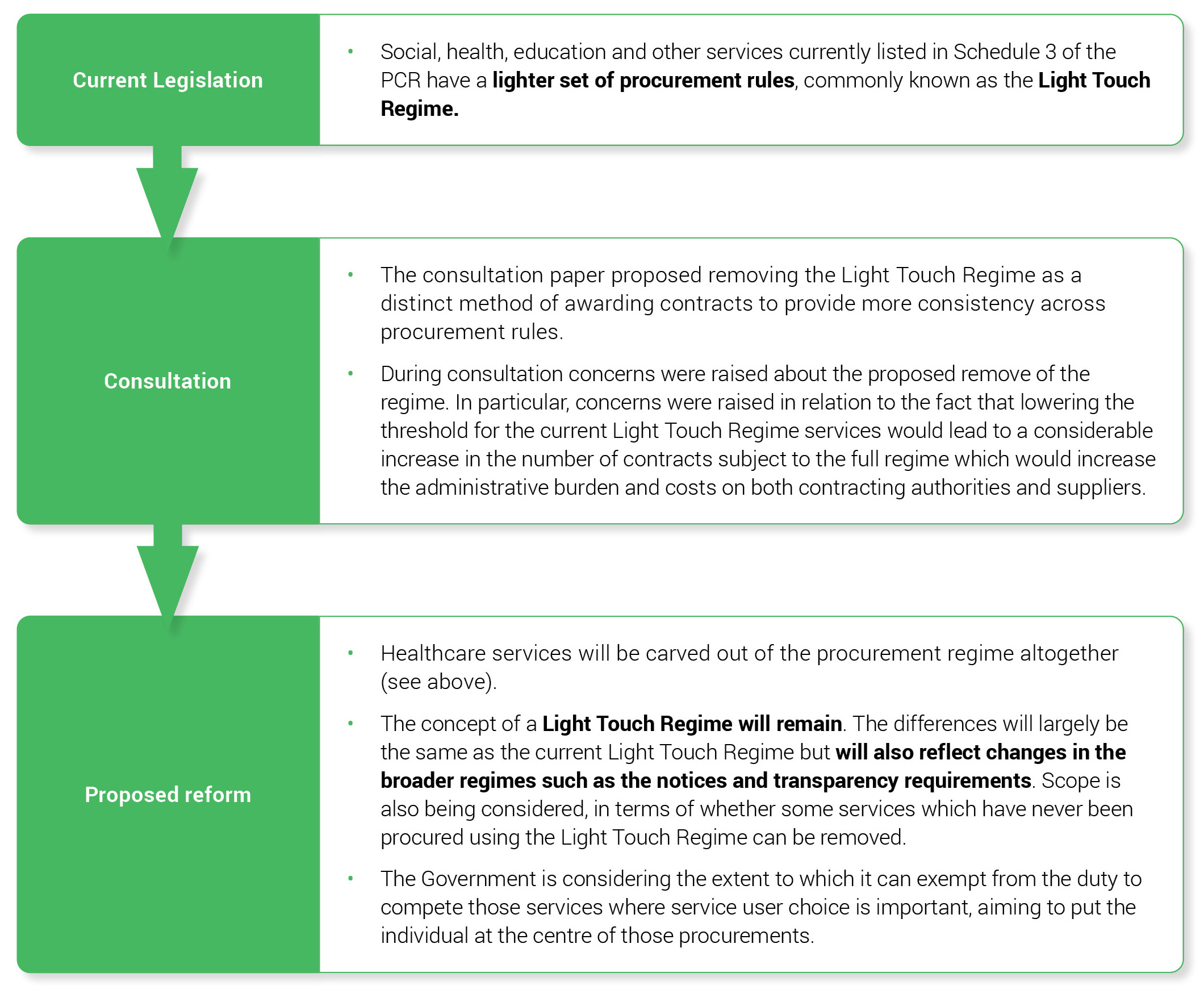 There is a lot of grey space in what the replacement for the Light Touch Regime will look like and what services will be covered. We will need to watch this space to see how commissioners of and bidders for non-healthcare light regime services will be affected.

If you would like to discuss this topic in more detail, please contact Fran Mussellwhite, Partner, or Victoria Croshaw, Solicitor.

Of Adequacy and Convenience: High Court lifts automatic suspension in...